Basketball is one of the most watched sports in the world and it is also the origin of many streetwear trends that are still relevant today. So much so that many NBA players are real fashion influencers today. On the occasion of the beginning of the playoffs of the American league, Project X Paris has concocted a little surprise.

We can't talk about fashion and streetwear for 30 years without talking about basketball, and in particular the NBA. One of the most watched and spectacular sports competitions in the world. If in Europe, the sport is also very structured, and our French team has very good results at the moment, basketball is a sport that is consumed mostly in the American way: more stars, more permissive rules for the offensive show, more means, more show. In the United States, basketball is a real social phenomenon, and the brands understood it very early. In the 80's, they started, Nike in the lead, to collaborate with NBA stars to offer sports equipment that will become fashion monuments for the next 40 years. For that, the brands were well helped by commercials broadcasted worldwide, but also by the brilliant talent of the greatest basketball star: Michael Jordan. 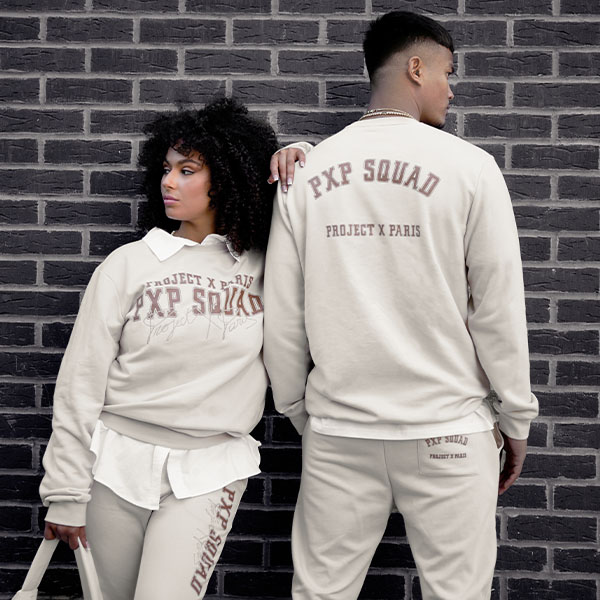 "His Airness", as he is still called today, is in fact the first fashion influencer from basketball. We obviously think of the Air Jordan, this mythical pair of sneakers that is still a must-have since. But also the logo of the Nike Air Jordan, an ultra-efficient visual tool that refers to the very aerial style of play of the Jordan legend. From that moment on, basketball became internationally popular. This sport also began to inspire hip hop culture, with many rappers making references to this sport (still today), but also start to include NBA jerseys in their outfits, for videos in particular. We can say that it is in the 80s and 90s that basketball has finished to enter the men's streetwear, and that it has become a real cultural and societal phenomenon. In the USA, for young people from underprivileged neighborhoods, the NBA and rap are in their eyes the only alternatives to trafficking to achieve their American dream. NBA stars today no longer hesitate to take a stand on political and social issues, a proof of the weight they can have with the public.

Overall, we can say that basketball, and in particular the NBA, is a major influence of current urban cultures. Via rap, obviously, but also via fashion and marketing. The mythical Iverson has shaken the dress codes of the league and the world, we also think of the many basketball players who have made trendy the "tap and socks" fashion. We also think of video games like NBA 2K that have become very strong licenses in the industry. The fact that a lot of scenes in movies or series made in the USA show young people playing basketball on the famous "playground", in the middle of the city, has reinforced the links between urban cultures and this sport. Basketball games are played in the street, with fences and people chatting around. And as it is soon the NBA playoffs, the most anticipated moment of the whole season, at Project X Paris, we decided to pay tribute to the universe of basketball with some capsules.

PXP gives a nod to the world of basketball

A real streetwear brand can't do without an outfit or a streetwear style inspired by basketball. Of course, we already told you about the PXP UNIVERSITY capsule, which is directly related to basketball. Indeed, many young people must already pass through the university divisions before entering the NBA. So we find the bomber jacket (man / woman), the inevitable piece of a good sports outfit at the university, with the colors of his school in general. For a good men's streetwear outfit, you can also opt for a combo of tracksuit bottoms and hoodie, with matching colors to produce a very effective "men's jogging suit" effect. Almost all models are also wearable by women who can also make their little jogging set woman, with pieces that will be a little loose and very comfortable.

The diehards who do not want to wear a hoodie can fall back on the crew neck sweatshirt, perhaps a little more passe-partout. For those who are also fans of a more vintage style, the SQUAD  capsule is made for you. The style is also a direct reference to the American university, but the typography of the logo and the choice of colors give a slightly retro look that is also very fashionable at the moment. The cuts of the jogging bottoms / tracksuit are a little more slim, but much less tight at the ankles, a more traditional style in a streetwear outfit. The UNIVERSITY and SQUAD capsules are a bit of a typical American student athlete look, especially for basketball and American soccer students, a casual yet sporty / dynamic look that reflects their state of mind. The two capsules remain in a relatively traditional streetwear style, in terms of typography and cuts.

For those who want something more different, more ambitious, especially in terms of design, we also have exactly what you need. The PIXEL capsule will meet your expectations, with a completely revisited logo that makes a nod to both the world of basketball and video games. The mention "Project X Paris PIXEL CAPSULE" is written in small size just under the logo which represents a pixelated basketball and basket. This logo can be found on the white t-shirt, the black t-shirt, but you can also find it on the hoodie, again available in black and white. Those who want a complete sportswear style outfit can also take the pixel basketball design shorts, available in both colors. Finally, the surprise piece, for a sporty effect pushed to the maximum, the sleeveless t-shirt, still with the same Pixel logo. A man's garment that will remind the basketball jerseys, a wink assumed. We are really proud of the logo which is inspired by "8-bit art", a real cultural phenomenon on the net. And if at Project X we are obviously happy with our jogging suits and shorts on the three capsules, you can also marry the bomber jacket with a pair of wide jeans, a la Iverson, or opt for any other possibility. Because with these 3 collections, the combinations of colors and models are numerous! So go get equipped to enjoy these NBA playoffs in the most stylish of outfits.