For the release of their new campaign, the brand Project X Paris and Yuza Paris called on the Parisian stylist Youth SMHR.

Having the same vision of creation, they know what young people expect. Gone are the days of strict elegance and refined cuts. Now they want chic with a "wild touch". The tone is set, for the release we are on "Bad Ass", but with the Project X Paris sauce. The stylist Youth Smhr, a rising star of the Parisian street scene, brought his personal touch to the outfits. Focus on a stylist rocked by hip-hop and fashion.

"Who is behind Youth Smhr?

I want to be recognised as Youth Smhr. SMHR is short for my surname and Youth is my first name. I am 23 years old, I went to business school straight after my baccalaureate. I got my master in fashion and luxury management and in August after my internship I started to apply for a job in a boutique as a manager. I applied for a month and found nothing. I got four replies and all four replies were "no".

After a month of rejection, I started to take the "no" as something that stimulates me. So I started to work on my own as a designer. I started with the people around me: with my little brother, my little sister and so on. And after a few days, I had the first person who wrote to me on Instagram asking me to do a look for him. And it went on like that. I really started out of passion, not thinking about how I was going to fund it, how I was going to make a living or anything.  It was really "I'm doing what I love".

"You have been in Vogue New York, is it a consecration for you?

It's true that when I was contacted from Vogue, it was three months after I started my photos. I'll tell you the truth... I wasn't ready. Vogue is a big access thing, I'm going to take it seriously. It's fun, it's surprising, it's shocking, it's cool, you're happy, but the point is to keep your head on your shoulders and tell yourself that today you made Vogue and you're going to continue to create more magic and not take it as an accomplishment. Staying humble is very important. That's what I do. That's why I don't show off, I don't put myself forward. Because I'm doing this for the people in the end and not for me.

"Tell us a bit about your stylistic concept and visual codes?

Honestly I don't have a perfect definition to my own style and what I do. I create, and I follow my feelings.

Everything I see, everything I hear, touch, feel, gives me inspiration. And from there, I try to create in my own way.

"Where did you get the idea to put your arms in your pictures?

This idea actually came to me when I was going to the toilet at home (LAUGHTER). 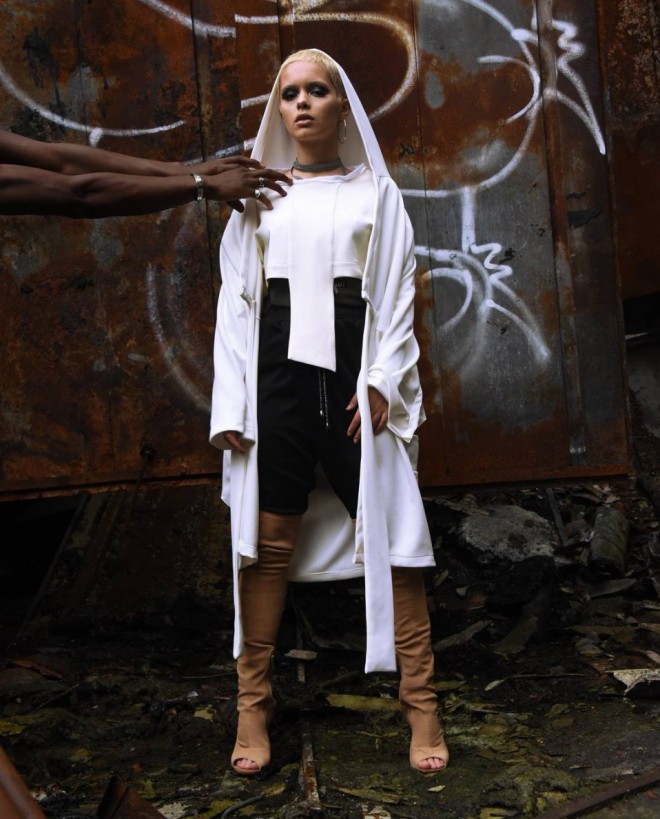 "Are you inspired by music?

When I was a student, my final thesis was about the influence of hip-hop culture in the fashion world.  Because the foundations of hip-hop culture are creative as hell. And I think music is a way to connect people. You can see it, when there's a concert, everybody's a friend, everybody's in the same mood. Sport is also a way to bring people together. When there is a world cup, people support the same team, regardless of skin colour, religion, etc.

Fashion is also a way to connect people. I know that I will be able to do it in my own way if everything goes well, if I keep working. But it's true that the codes of hip-hop culture are the ones that are closest to my work. I'm a young guy from the suburbs who's nervous when people say no to him. He believes in himself, he knows that he has talent and that he can do something, create his own place in this artistic milieu. Basically, hip-hop culture is a creative movement, even a scholarly one. I really identify with hip-hop.

" - What are the codes you find yourself in when working with Project X Paris? "

The major code I find myself in with this brand is the street side. I come from the street and I grew up there. I'm not a Parisian at heart. I had a street adolescence. Everything around me is street, I wear street shoes. And this brand is quite streetwear, but with its own definition of streetwear.

Project X Paris is a very family friendly company. I spent several days working with the Project X Paris team for the release of a new campaign and, sincerely, the 4 days were not all work. It was really like a family and I really like working in this family spirit. It's where you produce more in the end. I met people, we worked in a good mood, we were all there for the same thing: to create magic and that's what I appreciated. 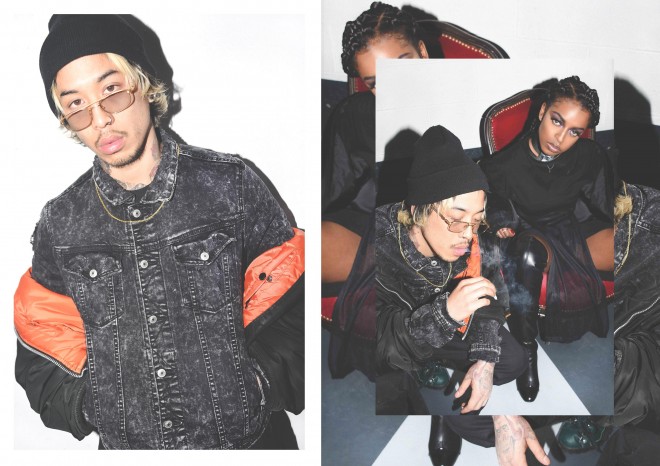 "How do you usually deal with your models? Is it a mutual exchange? Do you adapt to their basic style to create new looks?"

I'm the kind of person who says that fashion is for everyone. So I don't need models who are six feet tall, 110 pounds, and blonde. No. That's why on Instragram I work with models of all origins, weights and sizes. And from there it's simple. I like efficiency and simplicity. If I like your profile, we shoot. The model gives me her size, her shoe size and nothing else. Then I look at the photos on Instagram, the template, I prepare a specific look for the model.

We do the shoot, if the photos are beautiful, we post them to each other. I really try to build a bond of friendship and trust with my models.

"Do you have a story to tell us about your latest project : collab with Project X Paris and Yuza ?

Yes (laughs)! Actually Khleopatra was a model I had already spoken with before and it didn't go very well. For various reasons.

When I saw her on this project, I remember being pessimistic and even saying to myself "Ah, damn, I don't want to work with her". But then I thought "no, you don't know this girl, you've only talked to her on Instagram. Maybe you'll get a different idea of her.

And it turns out that working with her on this project, this girl is really the opposite of what I thought. She is lovely, kind, simple and she works very well.

I put my pride aside and saw that she was a great role model. It taught me a lesson to have false prejudices about people I didn't know.

"What are your current projects?

Secret Defense (laughs), I have a big personal project coming up. I can't talk about it.

I can only say one thing: I'm preparing a bomb ;)